The latest thinking, news and events from the world of Recruitment

Advertised salaries reached a standstill in March, as a slowdown in the jobs market takes hold according to the latest UK Job Market Report from Adzuna.co.uk.

Advertised salaries reached a standstill in March, as a slowdown in the jobs market takes hold according to the latest UK Job Market Report from Adzuna.co.uk.March saw the average advertised salary stall at £33,815, increasing just £15 from £33,800 in February – amounting to a 0.0% monthly rise. This tail-off comes after monthly rises of 0.6%, 0.8% and 0.6% across the preceding three months. On an annual basis, advertised salaries dropped 2.0% from £34,513 in March 2015.

After a promising start to 2016 signalling a potential rebound in salary growth, a jobs market slowdown is now impacting upon advertised pay. Recent political developments, including the implementation of the new National Living Wage in April, and even the uncertainty surrounding the upcoming June Brexit referendum may be bringing some elements of hesitancy to the jobs market – and restricting the pay on offer for new staff. As well as this, unemployment has risen for the first time in seven months, the latest ONS figures reveal, to reach 5.1% in February.

Doug Monro, co-founder of Adzuna, comments: “It’s a time of turbulence for the jobs market. Unemployment is climbing and political uncertainty could well be impacting hiring plans. In particular, recent reports indicate hiring permanent staff may be being put on pause until after the EU Referendum as employers turn to temporary workers to fill gaps.[1]2 Predictions of risks to jobs and the economy show how vulnerable the employment sector can be to wider economic change.

“The new National Living Wage also poses a natural challenge to the status quo. Nerves about bigger wage bills could mean staff perks will be first to go to fund company’s extra costs. These reports are already flowing in, with overtime pay already taking a hit. April’s legislation is a crucial step to getting fair pay for existing workers”

Meanwhile, the number of advertised vacancies saw a lift in March, rising to 1,160,058 – up 3.9% from 1,116,202 in February. Alongside this, job competition eased between February and March, reducing to 0.56 jobseekers per vacancy from 0.59 the previous month. This also marks a significant improvement from 0.89 ratio in March 2015. 40 out of 56 cities across the UK now have more available positions than jobseekers. Cambridge is leading the way as the best place to secure a job, with just 0.08 jobseekers per vacancy, closely followed by Guildford (0.10) and Oxford (0.11).

Despite this improvement many cities across the UK could still face ongoing skills shortages. With the upcoming referendum potentially set to affect workforces across many industries, skills could be in even further short supply. A rising unemployment rate suggests a mismatch in jobseekers and openings that need to be filled.

Doug Monro, co-founder of Adzuna, comments: “More available jobs and decreasing job competition form a great combination. Jobseekers should feel encouraged that jobs are out there. Hopefully, vacancies will keep on increasing as the year progresses. But more does need to be done to make sure workers have the right skills for the jobs on offer. The opening of the National Skills Academy, geared towards developing construction skills is a great first step in developing home-grown talent. With the winds of change potentially placing certain workforces under threat, it’s important now more than ever to actively nurture skills.”

Some of the industries that could be most affected by the National Living Wage have seen vacancies fall significantly from February, alongside seasonally expected drops in part-time jobs and customer services positions. The Retail sector in particular has seen available vacancies fall 7.0% month-on-month to total 31,801 positions.

The Manufacturing sector has also had a difficult month, with the average salary falling to £30,865 in March – down 1% from £31,309 the previous month.

Employers may also be holding back on hiring as they await the results of the EU Referendum.

Doug Monro, co-founder of Adzuna, concludes: “The National Living Wage and the threat of Brexit may be affecting many industries and could continue to do so for some months to come. For sectors such as Retail, which employs many lower-paid workers, hiring is being paused to outweigh larger staff wages – and for manufacturing, this rise has created further problems.

“Manufacturing has had a nightmare 2016 so far. After job losses in plants across the UK, the search for a Port Talbot plant buyer is crucial. Thousands of jobs depend on a deal. With vacancies falling it’s going to take a while for confidence and investment to truly return to the industry. After this latest hurdle is overcome, hopefully British steel can rediscover and regain its former strength.”

Some sectors managed to defy this trend however. Advertised maintenance jobs increased to 3,898, rising 6.0%. The social work sector shared this joint-highest 6.0% increase in vacancies – with 25,195 positions available in March. 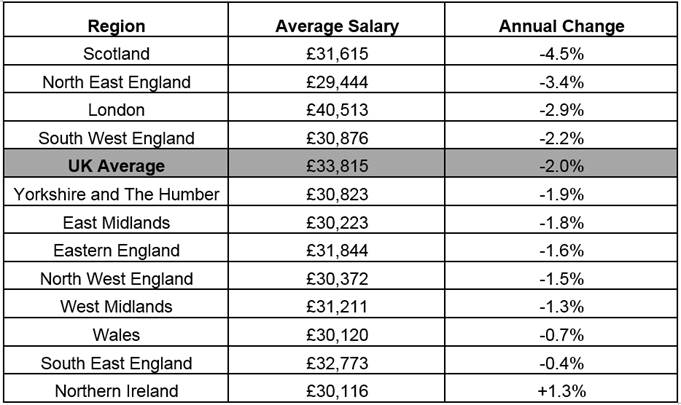 “Northern Ireland is the only region to defy the downward trend in advertised salaries. The manufacturing industry in particular has suffered in the region – job losses have quickly overwhelmed the sector. But the latest figures show that companies may now be prepared to pay for new recruits and to invest in new staff.”